RadioXUAR: The Unheard Music (of the Uyghurs)

I curated this nearly three-hour set of Uyghur music with between track commentary for WFMU's Transpacific Sound Paradise with Rob Weisberg shortly after returning from my second trip to Xinjiang, the same trip that resulted in my travel novella, One Night in Ürümqi.

Despite serving fifteen-odd years in the live music business, researching, booking, programming, and presenting world music from every continent, I never once came across Uyghur music (Tuvan, Mongolian, Uzbek, et al, yes). So you might imagine how excited I was to have been driven into a shameful public frenzy upon hearing a driving, genre-defying song with a great hook by a Uyghur artist known as Rahimjan Wuxur, blaring out of the overdriven loudspeakers of one of the many Uyghur music kiosks to be found in Ürümqi (or it might have been Kashgar).

“The SUV’s state-of-the-art surround sound system pumped out Uyghur Pop. The ubiquitous local genre juxtaposed ancient instruments with cutting-edge electronic ones and had its own Vegas-like star system replete with flashy, ’70s Elvis-inspired silk and polyester stage costumes. U-pop blasted from every cd shop, and it had grown on me—an unrepentant pop-hater—with its frenetic mix of earthy tradition and synthesized modernity. Dramatic, heartfelt, unaware of its own nostalgia, the music was kitsch but not old-fashioned, and its lyrics writhed with love or sadness, seldom stewed with anger or revenge, never spoke of revolution, and throbbed with arresting beats below the soulful, tight-lipped cries of its singers. It was what remained after more traditional forms, often viewed as rebellious, were consumed and digested by the Party’s censors. Buoyed by U-pop, the four of us floated untouchable across Ürümqi’s cutthroat traffic in our low-altitude Kevlar blimp.”

This pretty much sums up the feeling Uyghur music gave me overall, but not specifically, for I was to discover Uyghur artists and their music span not only the traditional and the pop, but also classic rock, hip hop, metal, even punk.

Despite being oppressed, the Uyghur music scene is surprisingly rich. There are even some Uyghur guitar gods in the vein of Jimi Hendrix to be found embodied in such players as Hassan Mahmut and the late, great Ekhmetjan, rumored to have been buried with his guitar in his hands. For a truly golden-voiced, more-current singer-songwriter, see Parhat, who won the PRC's version of American Idol and has toured both Europe and America. All remain to one extent or another monitored or censored, if not jailed or facing reeducation. They need you to know them.

Enjoy RadioXUAR: The Unheard Music (of the Uyghurs) as a musical and spoken word journey to Xinjiang Province, far Western China—the traditional lands of the Uyghur people. My intent with the podcast was to bear witness, share, pay homage, and inform by presenting only Uyghur-produced or -presented music selections ranging from the deep traditional roots to Uyghur Pop to illustrate how Uyghur artists have struggled to squeeze their incredibly diverse and talented expression through the tight, getting tighter filters of the CPC (Communist Party of China) while trying to keep their musical and cultural legacies, and many times themselves, alive. Available worldwide for free on the web, RadioXUAR is their, the Uyghurs, radio station. Let their unheard music and musical voices linger. Free the Uyghurs! 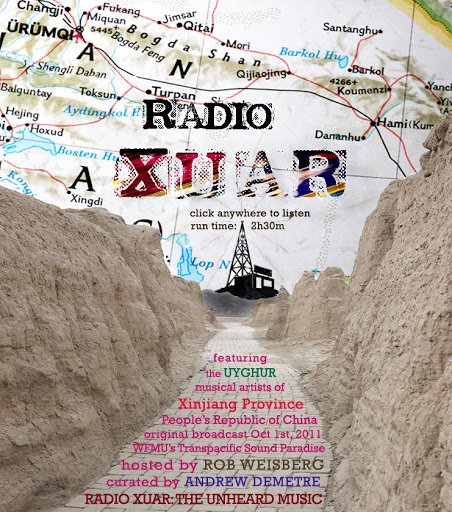