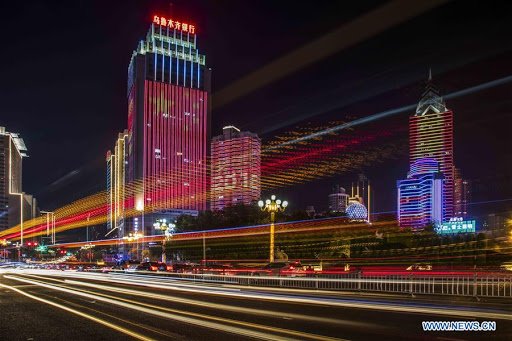 We backtracked along the walkway. The hooligans now joked and laughed among themselves, paying us no attention. We descended, crossed the street, climbed into the car, and sulked. Relief doesn’t come easy in these parts.

I took on the Uyghur way of self-blame. I pressed my hand into my chest, explaining to them it was fine, even that it was my fault we had to leave. I tried unsuccessfully to convince Rihangül I hadn’t flirted with the girl. Or had I? Ahmat, Aziz, and Rihangül neither accepted nor rebuked my apologies or explanations. They grumbled in their seats.

“Mr. Ahmat andah Mr. Aziz are sorry they have not found the right location for you to celebrate,” said Rihangül.

“No apology necessary. I’m the one who should apologize. I’m having the time of my life,” I said.

Rihangül relayed my counterapology. Ahmat and Aziz fought to be the first to shake my hand. “I feel terrible for Ahmat andah Aziz, putting pressure on theyselves to please us after Ahmat’s promotion. We should be taking them out,” Rihangül said. Her mouth cinched into a pout.

“Well, please tell them I’m easy to please and I don’t want them to exhaust themselves on my account,” I said.

“They can’t do that,” she said. “They have to do they best for you. You are they guest. They have to make everything perfect for you. That’s the Uyghur way. Nothing too good for a guest. Especially for a guest we like.”

Her words sunk in. The repartee of upstaging friends with generosity and effort was the complete opposite of what I was used to. I recalled my dread of having guests and the myriad ways I had conveyed my dread. In the future I would become a better host.

“You don’t understand us,” she repeated. “It has to be perfect. Anything less? Forget it!”

Rihangül stared ahead then leaned into the front seat to relay the idea that I didn’t understand any of them to Ahmat and Colonel Aziz. They sighed, and we exchanged nods and agreeable smiles. Uyghurs. I didn’t understand them. They probably didn’t understand me either. But the four of us got along fine, glued together by circumstance, in and out of the car, searching for a place to drink.

Ahmat turned around and gazed ruefully at Rihangül as if she were the crystal ball that could solve our dilemma and any other problems we might have. I couldn’t blame him. I had done it too.

Behind his cheery face, the new Xinjiang Postmaster General looked deeply stymied. Rihangül wasn’t up to date on Ürümqi nightlife, but she offered some options. Each was met with shaking heads punctuated by disappointed yakhs. Most of the places she suggested had been destroyed during the riots and shuttered, or gutted and renovated. They were simply gone.

Suddenly Colonel Aziz cranked the music and floored the accelerator, pressing us into our seats. He rambled and looked over at Ahmat, who had started nodding off and had his head in his hands. Ahmat’s smile endured, but I could see he ached for the first relieving swig of liquor that would go into his mouth.

He roused himself, rolling out his shoulders, extending his arms, and stretching his tree trunk legs. He and Colonel Aziz generated a he’e/yakh list of places where we might finally have our pleasure. Aziz threw the steering wheel to the side, almost sending Rihangül into my lap. He and Ahmat discussed something and got on their phones. From the sound of it, they were getting advice from someone.

We turned back onto a main road and headed in the direction of the city’s main power plant—a looming monstrosity that spewed a meringue of sick yellow exhaust over the hundreds of cookie-cutter housing developments being erected on Ürümqi’s outskirts. Colonel Aziz coaxed all eight cylinders into frenzied left and right turns that had Ahmat as taut as a cadaver in the passenger seat and Rihangül and me flailing around in the back like a pair of crash test dummies strung up in a wind, squeezing each other’s hands white.

Earlier I had thrown my fate in with the Uyghurs in their wearing-a-seatbelt-equals-bad-luck superstition. I regretted it the instant the Colonel floored it and, punching at the horn and grinding his teeth, rocketed his machine into a crammed intersection, destroying any semblance of trust between us. The routine daredevil maneuver had the other maniacs honking at us, hating us, and heading for the sidewalks. Had he lost patience with everything?

The answer was no.

Driving at the end of one’s nerves was status quo in Ürümqi. Naked aggression and lawlessness—oddly nonverbal—were played out right at the surface. Any trace of caution appeared at the last second before impact, and I had yet to witness a single accident. Defensive driving? Bosh!

We braked to a stop. I was petrified but gathered the courage to unclench my jaw and open my eyes. Colonel Aziz had parked beside what appeared to be a random family’s small house. We tumbled out of the car. Rihangül and Ahmat were unfazed: Ahmat straightened out his suit and tie and reestablished his smile. Rihangül collected herself, dabbing on fresh lip gloss and smoothing out her silk blouse. For them it was just another day in hometown traffic, but Aziz’s death run had rattled me and had me staggering stiffly in a tight circle, hands turned to bricks, mouth turned to sand, and breath shallow. Colonel Aziz got out, slammed his door shut, checked that ours were locked, and trotted ahead of us.

We marched in an ungainly formation through the small house’s flimsy door.It opened into a small café. We ambled across the sparse

dining area into a dreary private room in the back. A dimly lit lamp clung to the ceiling above a simple table and a collection of mismatched chairs. On the table drooped a designless tablecloth. No sharkarium, no sordidness enlivened the room. Brown paneling clung to its spartan walls.

We filed past Colonel Aziz, and he closed the door. We each dragged a chair over to the table. Plates of food, a dented pot of tea, and four glasses floated in. I hadn’t spied a kitchen when we passed through the café area or seen any waiters, but like some telekinetic gesture of the culture,the food had arrived. Ahmat’s bottle stood in the center of the table flayed of its colorful skin, its seal broken, emitting its bizarre, pungent breath.

Rihangül reached up and back and pulled her abundant hair into a tight, forehead-stretching ponytail. Her motion was disarming set against the drab walls of the room, and the bleak environment lapped up the small excitement. Ahmat and Aziz took to staring at her. Rihangül stared back. “How are your wives and children?” she said.

Ahmat and Aziz nodded and smiled, reassuring each other. I had

forgotten they had wives and children at home. Apparently the two devout husbands and fathers had too. Their wives would rarely mingle with the likes of us single, unmarried lovers and especially not with a vivacious, independent woman.

Rihangül’s seemingly loaded Uyghur pleasantry served as a stalling tactic. But her purpose here was obvious and inevitable: she was flirting—or putting her friends in their place. It was all so indirect. She relished holding court with three men—probably one of the few Uyghur women in Ürümqi who could get away with it.

It must have baffled Colonel Aziz and Ahmat how I could gallivant around with her, while their wives remained home up to their headscarves in children and housework. One of Rihangül’s credos was “Allah gave me all the best qualities, and he wants me to use them.” And she did. The qualities, from her pleasing physiognomy to the fiery ability to negotiate anything, whether granted by Allah or not, gave her legs in two disparate worlds—hers and mine. The woman hadn’t worn anything resembling a burqa in a decade, so she managed to avoid some of the contradictions it embodied. The tradition of wearing one was—so the rumor went—certain to be outlawed by Party decree, while at the same time it was becoming a rebellious fashion statement.

And how might Colonel Aziz and Ahmat, my fellow subjects in Rihangül’s court, reconcile the image cut by the subdued man and woman they chaperoned in Ürümqi with the pulpy scenes of my first night out with Rihangül back in New York? Quaffing beer and playing billiards against a bevy of hipsters and Nuyoricans at a pool hall on Avenue C, Rihangül in her sexy black fishnet billiard glove, a glove that she insisted, despite my scoffs, was “good luck” (we did win every game); our quick exit after being accused of being hustlers; our elated sushi dinner afterward awash in sake and beer; our drunken stumbling; our public making out—tongues flailing—all over the street; eventually making our way into Central Park, where, atop a mossy boulder, Rihangül, chain smoking and gripping my hand, recited a breathtaking Uyghur poem. Her expression was so sincere, like that of other Uyghurs I had met since, there was nothing

at all corny about it.

Of course I would never even hint at such anarchic scenes to Mr. Ahmat, Colonel Aziz, or anyone else in Ürümqi, but Rihangül had embraced her power both there and here, and it wasn’t sordid. She was what my male friends and I called a “silencer.” Something about her left you speechless. She was also a black belt. The incongruity was baffling.

I felt hot. I took off my jacket, hung it on my chair, and rolled my shirtsleeves up over my biceps.

“Andrew guy are you showing how strong you are in front of my friends?” Rihangül said. She broke her own spell. Here we were. She smiled and adjusted her blouse.