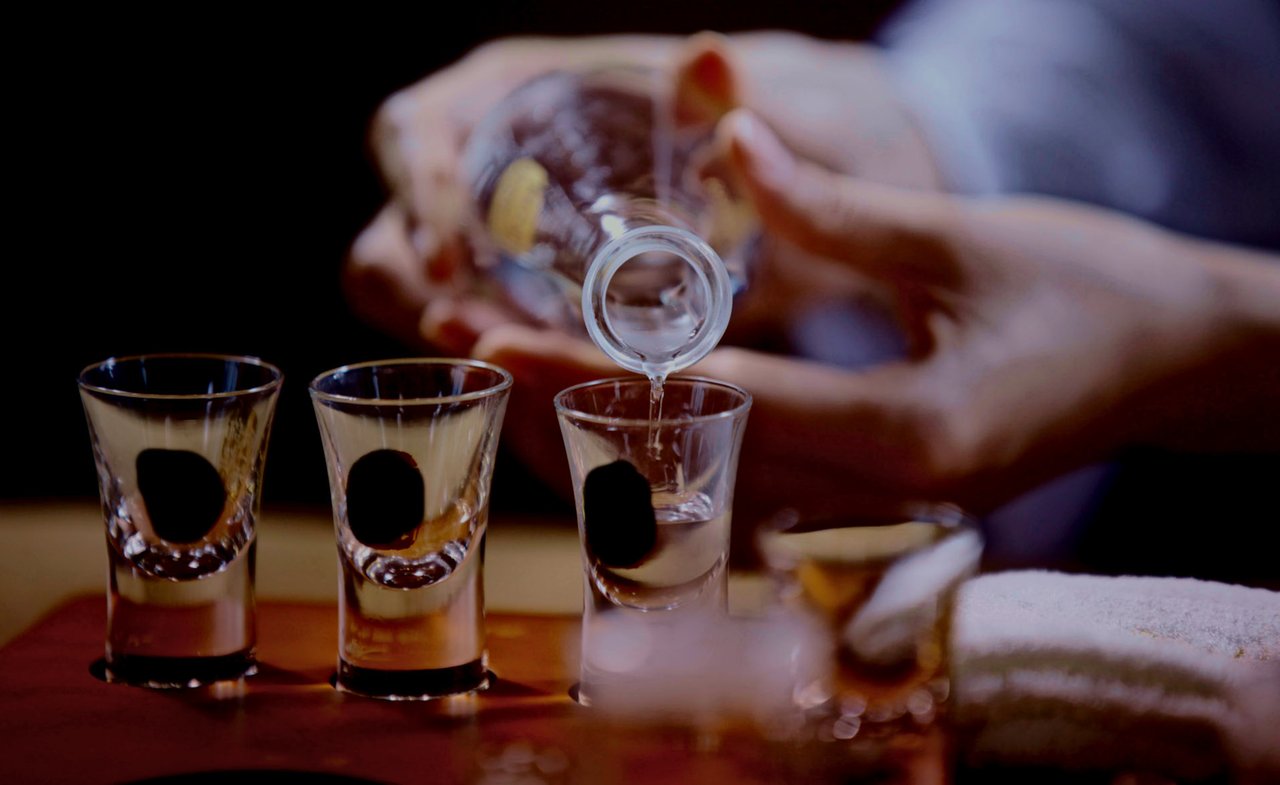 The libation commenced. “Sister,” Ahmat said. “The last thing I want to do is make you uncomfortable. But won’t you please enjoy yourself with us too? It’s a special occasion.” Then he turned to me. “Brother Andrew, is that okay with you?”

I couldn’t stop the chuckle triggered by his assumption I was somehow in control of her. “Of course. Rihangül, please enjoy a drink with us,” I said, going along and granting Rihangül permission to drink. A first.

“Rahmat,” Rihangül said, smiling at her friends. The protoplasm writhed in the bottle. “Ooewf ! Terrible. I will not drink any of it,” she said in an aside to me, in English.

“What? You can’t back out on me now,” I said. “I don’t want to drink alone with these guys. Maybe they don’t drink often, but I’m sure once they start, they won’t stop.” One of her warnings to me before I arrived had been to exercise caution when drinking with a group of Uyghur men, especially when they are celebrating with a male guest close in age. Another warning I traveled around with was that unknown things given to you by unknown people can easily kill you. Both applied. “What will you do when it’s time to drink?” I said.

Rihangül maintained her smile. “I will sip it. To keep up appearances.”

Her use of an idiom caught me off guard. Keeping up appearances was what it was all about in Ürümqi.

“I’ll pour the rest into your glass under the table when my wonderful andah generous friends are not looking,” she said. Another thing I had learned about Uyghurs was that they plan ahead.

Ahmat started licking the rough of his dry lips.

“Ahmat, brother, you look like thirsty dog searching for water in the middle of Taklamakan,” said Colonel Aziz. He snickered and lowered his head.

Ahmat grinned and eagerly offered his glass. Colonel Aziz opened the bottle and poured two sizable shots for each of the men and one

The liquid glowed, a dull and sick green-gold. The vile stuff warranted a toast. We raised our glasses. “Hosh !” we said.

Ahmat’s eyes widened. He brought his glass to his nose. “Wooysh,” he said, sloughing off what I assumed to be a shudder of revulsion.

“I will not drink because I am driving,” announced Colonel Aziz. “Someone has to remain sober to control and protect the others. I don’t want to put you or our guest brother Andrew in danger. When I am not driving, I love to drink.”

It was the first time I heard any color of arrogance in his voice. Draconian penalties awaited those caught driving drunk in the PRC, especially, I supposed, for an Uyghur ranking PLA member. How anyone could dare mix alcohol or other intoxicants into the treacherous Ürümqi traffic cocktail was beyond me. I brought the glass to my lips. A crud gathered at the back of my throat—antibodies moving in to defend me against my own morbid appetite. A metallic, rancid clove taste spread inside my mouth as I cleared my throat and prepared to ingest the contents of the glass.

Colonel Aziz seized my drinking arm. I glared at him. He turned to Rihangül; they discussed something. Rihangül seized my other arm. Were they arresting me? “Wait, wait,” she said. “Mr. Aziz says you have to push out all you air first andah when you drink, drink with you deep breath, as deep as the earth.”

She made it sound so poetic. Aziz’s eyes pierced mine, and he nodded. I nodded back. They released my arms. “He’e,” I said. My mouth would serve as a carburetor. I breathed in, then emptied my lungs until I wheezed, and tried, as instructed, to inhale the drink with my breath. Instead of riding the current of my breath, the reagent’s volatile fumes robbed me of it, and the entire shot spilled across my mouth. It was as awful as I had imagined it would be; it made unflavored mouthwash taste like fruit punch. It didn’t really have a taste—it was pure palate-destroying effect. And it just got worse.

A surge of blood rushed to my face, and Rihangül shrieked. “Woy my God! So red! So red!” She was so shocked at the sight of me that her face waxed pale, and her sharp eyes went fuzzy and rolled back. She was as close to fainting as I had ever seen her. It was true. My face burned bright tomato red, and I commenced to melt. My hands went numb. One foot went hot, the other cold. A watery sensation rose from my toes up to my ears, over my eyes and head, coupled with a terrible, burning water-up-the-nose feeling. A yogic bandh broke out in my mouth and conspired to publicly animate all of my limbs and thus further humiliate me. Politely contain yourself insisted a voice.

I did, but in so doing had to yield to a feeling of being dragged across a grove of low, expectant cactus. A hot tide rose and fell in my mouth, searing and researing my taste buds and bringing painful form to the amorphous geography of my tongue. The tide swirled into the crook of my throat, now searing my tonsils, and glommed onto my uvula—which I didn’t think had a nerve in it until then—and sunk a fang in. The fang caused an unbearable tickling, and I gagged, blushed, cried, moaned, laughed, oozed, and blathered. Palate ruined, and fully ashamed.

I clawed at my ribcage to make room for relief and to keep from vomiting. I considered requesting help or at least a glass of the boiled water everyone drank here, but I feared uttering a word because I knew I would either throw up or any words exiting my mouth would be garbled beyond recognition—not that it would daunt my non-English-speaking hosts. I hadn’t swallowed yet, and Ahmat and Colonel Aziz were already grinning from ear to ear.

I faked a smile and quelled my panic by tapping out a rhythm on the table with my glass. I wouldn’t dare insult my hosts or shame myself by spitting it out. The oh-solimber base of my tongue, in a heroic final asana of death, finessed what had become a hot plug of corn vodka off my uvula, against my pharynx, and up and over my epiglottis—and now I needed air or I would suffocate because a cramp had seized the abyss between my Adam’s apple and larynx, and my windpipe had closed off. I was having a wonderful time.

I thumped myself in the sternum while Rihangül pounded me—with apparent glee—on the back, thinking it would help, but it just caused more pain. I was her baby and she was burping me is how embarrassing it was. Ahmat and Colonel Aziz were still grinning from ear to ear. Finally the cramp let go, the gasps came, and fresh air filled my lungs.

The rancid clove taste rose again in the back of my throat. I closed my eyes and listened, hoping to hear the plug slipping down, but instead it reamed my esophagus. Sweat seeped from me. Shivers came. My head pounded, my throat tightened, a surge of willpower again stopped me from vomiting. A lone brain cell considered how the plug might react with my stomach acid. Something punched at the soft undermeat of my diaphragm. Then, suddenly, relief.

Warm, invisible hands cradled my guts, offering the same guilty satisfaction felt by a dog having his belly scratched low. Everything became languid. A final, scissoring pain gave way to a euphoria radiating from my innards to every cobweb in the room. A breeze, comforting as my mother’s breath, wafted over me.

I was its new vessel.

“Has brother Andrew ever had a drink like this before?” Aziz asked behind his hand.

“Not sure. He from New York, so of course he likes to drink. Americans don’t drink strong drinks like we do here. We Uyghurs are very strong people. The drinks in America are like liquid candy for smallish babies. Not like this,” Rihangül said.

She had it wrong, but I had to agree with my Uyghur comrades: this was a very special drink. It was a quasi poison. And we were celebrating with it.

he eerie notion—that I had swallowed a djinn—was a not-so-far fetched one in Xinjiang. I didn’t believe it, but I wasn’t laughing either.

“Hai Allah! Now I want to drink!” Ahmat said, rubbing his hands together. He threw his drink back—“Hai!”—and pushed his glass at Colonel Aziz for another.

From then on, if Colonel Aziz poured it, Ahmat drank it. Rihangül sipped at her thimbleful as if it were a martini, scanning for the first chance to sneak it under the table. It came, and as agreed I smuggled under my glass.

Colonel Aziz held the bottle close to me. It may have been boring a hole in my stomach lining for all I knew but it didn’t smell so bad. At close range it had a sweet aroma about it.

I grabbed the bottle by its slender throat and glared at it in the way drunken men do. The shapely crown refracted back the image of none other than horned Beelzebub the Deceiver himself. Glory and virtue, blame and evil, nourishment and gratification. Observed it, smelled it, tasted it, felt it—the djinn repellent and I still didn’t understand each other.

I released the bottle back to Colonel Aziz, sucked a breath through my teeth, and pushed my glass forward. “Another one,” I snarled.

The Colonel obliged me. I exhaled and tilted it in with my next breath, taking it like an Uyghur man. Ahmat floundered around in his small sea of drinks, a leer having overtaken his usual grin, his face as red as Mao, in turmoil.

“Ahmat, brother. I hope you will not be so red-faced when you have to go on television tomorrow. A shame to us all,” Colonel Aziz said.

Ahmat didn’t speak. He hulked over his elbows, his temples flexing in and out. Was he savoring it? Impossible. His cheeks inflated. He had the nerve to swish it around in his mouth. Would he gargle it next? A scowl tore at his face. He gulped and let loose his own relieved gasp, less desperate than mine. He turned his glass in his fingers and stared into it. A sigh leaked from his nostrils . . .