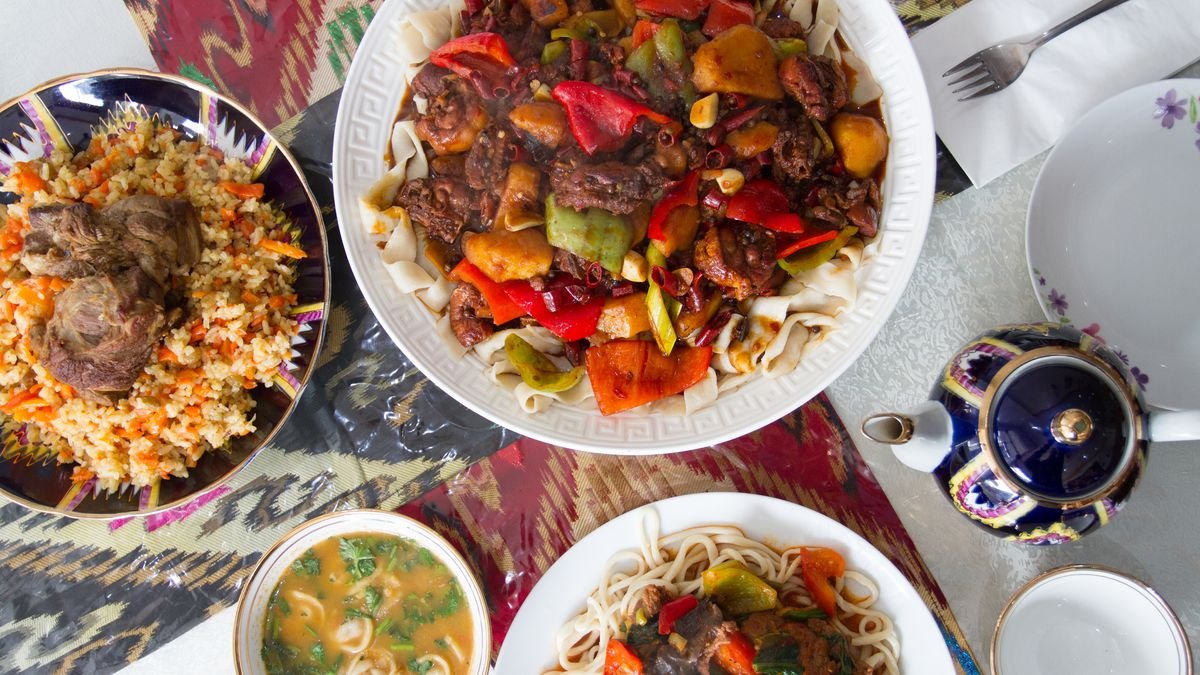 cuisine arrived, and we feasted: freely slurping our noodles out from between our chopsticks like human vacuum cleaners, ripping at lamb chops and kidney kebabs with our teeth, smacking our lips, gulping our tea, tossing our leftover bones onto the table, filling our bellies, and wiping off our lips, chins, and fingers with the thin, useless tissues standing in for napkins. It was as much fun as you could have eating a meal—so much fun, I could have gone on to eat the table and the delicious-looking tablecloth as well.

Ahmat and Aziz kept my cup filled with tea—the local etiquette—and I drank cup after cup. I tried to return the favor but was prevented. I pushed a plate of food, a lamb and rice polo, across the table toward them, but they just shook their heads and pushed it right back to me, preventing me from reversing the host–guest equation, so I would be the first one to enjoy his food. A similar routine had happened minutes earlier when I had attempted to pay my share of the bill. Uyghurs do not split the bill. Proper courtesy is to win the race to your wallet and be the first to claim the honor of paying for everyone else. Stomachs filled, pot of tea emptied, and plates long cleared, the topic of conversation drifted around to passports and visas. The visa held a magical place here, a golden key to the free world.

“Aziz and Ahmat want to see your passport,” Rihangül said.

I was hesitant but agreed. “He’e,” I said. I reached into my internal pocket and pulled out my dog-eared little blue book, the confident rival of Mao’s Little Red Book. I flipped to one of the visa pages at the back and perused a line of text near the top, above my China visa sticker:

“The cause of freedom is not the cause of a race or a sect, a party or class. It is the cause of humankind, the very birthright of humanity.”

I flipped to another page toward the front:

The words brought tears to my eyes, and I became even more of an object of fascination as I sat there, my eyes welling up over my tea and plate of food, sharing a moment with my passport. I carry my

passport with me more often than the average citizen, even in my own country.

Aziz and Ahmat glanced at each other, then at me, then at Rihangül. “What is wrong with him?”

“I don’t know. Let me ask,” Rihangül said, turning to me. “What is wrong with you Andrew guy?”

“Huh? Nothing,” I said. “I’m lucky in life. Explain to Aziz and Ahmat that I realize how lucky I am in life to have been born where I was. That is my fate. I appreciate their culture, their success, and their kindness toward me. I don’t know them very well, but in the future I hope we can be friends.”

A smile bloomed on Rihangül’s face. Ahmat flashed one even a dead-eyed shark couldn’t resist. Aziz’s only reaction was to gobble up the remaining food. I wasn’t sure what motivated it, but suddenly the two Uyghur men and I stood and congratulated one another over my passport, my chapbook of freedom. “Rahmat,” I said, placing my hand on my chest. “And the food is delicious. Bek oshapto!”

“Bek oshapto,” replied Aziz and Ahmat. They turned and spoke to Rihangül.

“They said you speak Uyghur very well, Andrew guy, andah they proud of you,” she said.

We took our seats, and I handed over my passport. Aziz and Ahmat leafed through it, perhaps searching for the line that had wrung water from my eyes. They leafed to the front and took in my photo.

“He looks dangerous,” Aziz said, eyeing me. “Invisible danger.” They found the visa page and inspected the one-year, multiple-entry visa sticker China’s consulate in New York had granted me, peering into it as if they were discovering a new planet. Then, suddenly, they deflated.

For me, getting that visa had been a breeze. You stand in line, pay your money, come back a day or two later, and voilà. A Chinese citizen would need good luck, good timing, and a spate of cash, most effectively delivered in the form of a bribe, to get a visa to the United States. If you happened to be an Uyghur Chinese citizen, you would also need to “know somebody.” Even in that case, the chances would be slim to none.

The three of them conferred. “They said Andrew guy he plan on coming to Xinjiang a lot. We wish we could visit America as many times. We can’t so please come back to Ürümqi often. They said they will protect you andah you will have not have to worry as long as you know them. You will be they brother!” Rihangül said.

I laughed. “Rahmat,” I said. “I will do that.” Until then I wouldn’t have guessed I needed protection. Aziz and Ahmat perused a few more random pages of my small, enigmatic book and handed it back to me. The four of us traded smiles.

“My wonderful friends also want to tell you anytime you come to see them you can consider them to be you great friends. You are they brother now, andah they will always show you good time andah take care of you when you come. And you will never have to pay for anything because you are they guest!” Rihangül said, covering her mouth.

Their unearned affection shocked me. “Bek rahmat,” I

Another conversation I had no chance of following whirred around, paired with an even more whirring round of tea drinking. We must have emptied three pots. Ahmat’s head disappeared as he groped around in the shadows near his penny loafers. He popped back up, produced an ornate box striped wild with color, and fixed it in the center of the table.

“It’s ah very special. My friends searched all over Ürümqi for it andah it took a lot of effort. Mr. Aziz andah Mr. Ahmat would have offered it to you before, but they are classy guys. Now that we have fed ourselves, we can go out andah find a very special place to celebrate,” Rihangül said, becoming amused.

“Okay,” I said, unsure what was so amusing.

I looked at the sharks. They hung in the water as if they were expecting morsels of chum to be tossed in. I caught myself intently considering if sharks might enjoy kebabs. A sly expression creased Ahmat’s face. He peeled open the flaps of the box and pulled out a gaudy crown of a liquor bottle. Into its curves and intricacies flowed a brown-gold liquid, more turbid toward the bottom. The very special drink: corn vodka, to be sure. The “King of Liquors,” or “the wodka,” as it had been alluded to in my presence, had been slipped out of closets, pulled from under sofas, yanked out of drawers, and retrieved from the deepest, dustiest kitchen cabinets, usually by the eldest man at the social gatherings we had attended—a guilty pleasure if ever there was one. It had followed me everywhere, and I had been avoiding it at every turn.

I had sampled it but had stopped its rude tang at the outermost edge of my lips. That’s all it took to concoct the many sobriquets I had—“Djinn Repellent” being my favorite—for the dodgy grog that made tough Uyghur men out of tough Uyghur boys. I didn’t even know if it was a true vodka. It was weirder than any vodka I had ever come across. It was too pungent, thick, and syrupy. A vodka by reputation or bootlegged Xinjiang moonshine derived from reptile blood, a desert ergot, or squill, who knew?

strength of your religious beliefs suggested the proper circumstances in which to indulge. The culture allowed excesses

the religion didn’t. The two practices, among the moderate Muslim Uyghur I had been with, could coexist. I was the guest; they had to offer it to me. To them, it was a complicated, shy dance. To me, it was simple: I was not looking forward to drinking it.

Ahmat kept the bottle out on the table long enough to make an impression then twirled it back into its prismatic shell and stashed it away. Well-known figures shouldn’t be spied flirting with vice in public. Besides being practicing Muslims, minority Party members invited extra scrutiny.

“Andrew guy, Mr. Aziz andah Mr. Ahmat say they hesitant to ask andah they say they did not want to offend you by taking you drinking too fast before eating at this restaurant. I told them you from New York and love drinking, so now they have fed us, they want to harry up andah find a private room so you people can celebrate Ahmat’s amazing promotion. What is your opinion?” she said.

“Are you still hungry?” she said.

The four of us brought our palms to our faces and hovered them over our foreheads and down to our chins in the traditional Central Asian way of giving thanks for bringing us together under pleasant circumstances. We performed it smoothly; at other times it had been performed with a slap and a rubbing of the face. I enjoyed performing this gesture. It was a prayer, an “amen,” a spiritual punctuation that had a meditative, reverent quality meant to bring people together, so they might come together again . . .