Back before Y2K, I ran concert venues, mostly transacting in cash. We always had a “money room”—a room dedicated solely to the collecting, counting, and keeping of cold, down-and-dirty cash (!). We didn't accept credit cards back then so hundreds of thousands of dollars in cash exchanged hands. “Cryptocurrency” would have meant some money forgotten in, well, a crypt.

Walking into the money room was like walking into a fantasy world, a cave overgrown with money. The accountant, if you could call him that, despite his flickering eyes and fast hands and a machine, would take the entire day just counting and bundling the money from the night before, eyes always wide. The amount of cash reflected on my role, so after good nights, I would be lying to say my eyes didn't also grow wide at the morning-after pile, the price of thousands of music lovers' hangovers. The places two dishonest people could go . . . oh well.

It was definitely tense walking all that cash in a bag through downtown streets to the bank to make the deposit before noon. For some stupid reason, the “accountant” and I never really concealed the day's booty, and we carried no guns or other weaponry (besides maybe a metal-tipped uniball pen). We were running too tight a DIY-ship to hire an armed guard like sensible people would.

Having that cash around was—is, might soon never be again—fun. Who wouldn't want to literally be sitting atop a pile of cash, or sleeping on it like a mattress, or rolling around in it like a dog in grass, or flipping it all over themselves like a seal does with sand at the beach. Or take a wad in each hand and run grinning and whooping it up into the nearest sushi bar and buying it out for a few invited friends and anyone else who happened to be there? I certainly would.

Take a look at the following passage from one of my books. I loved writing it because it offered readers a glimpse into what a real, slow-to-cashless, draconian cash-obsessed economy looks like:

“In the streets of Ürümqi, as in wider China, cash was king. Everyone packed fistfuls of folded-over, baguette-thick rolls of Chinese currency. Yuan. RMB. Hell, I did too, ever since I had become a living, breathing extension of Rihangül’s purse—her designated cash mule—upon our last visit to the black money market thriving on the very steps of the downtown Ürümqi branch of the Bank of China. A fat, coal-soot-and-god-knows-what-else-covered worn wad of red yuan [I love this last passage] was stuffed in my jacket’s internal pocket at that very moment. It was reassuring, even thrilling, to have it there—as reassuring and thrilling as discovering you had a backup heart. Had someone seen me in my Manhattan neighborhood, pockets bulging with cash, I would have been mistaken for a baller!

I begged Rihangül to translate a system of credit into their brainstorm. She began to, but I couldn’t muzzle myself anymore, and I recklessly blurted out the idea in English, their certain lack of comprehension be damned. Rihangül waved her hands across my mouth trying to shut me up; I swatted her hands away in order to continue. We must have looked insane to them. I slipped a credit card out and placed it on the table in a dreary patch of light. Ahmat and Aziz fell silent. The some-thing-for-nothing card, a plastic miracle available in silver, gold, platinum, or any other color you so desired. I explained to these denizens of the ultimate cash economy how one thin plastic card, tattooed with numbers, could contain such streamlined power. It could almost bring you back from the dead. Who needed cash?”

The former me definitely would. The current and future me, not so sure.

A contrasting perspective on cash arrived the time my former-significant other and I saw thick dark smoke twisting into the sky over the buildings a few blocks away. She and I enjoyed spectacles so we went over to see what was going on. Guess what. It was my bank, going up in flames. My first thought (FDIC aside) was that all the bankees' money was going up in smoke along with the brick and mortar. An accidental money burning, Cash 451. 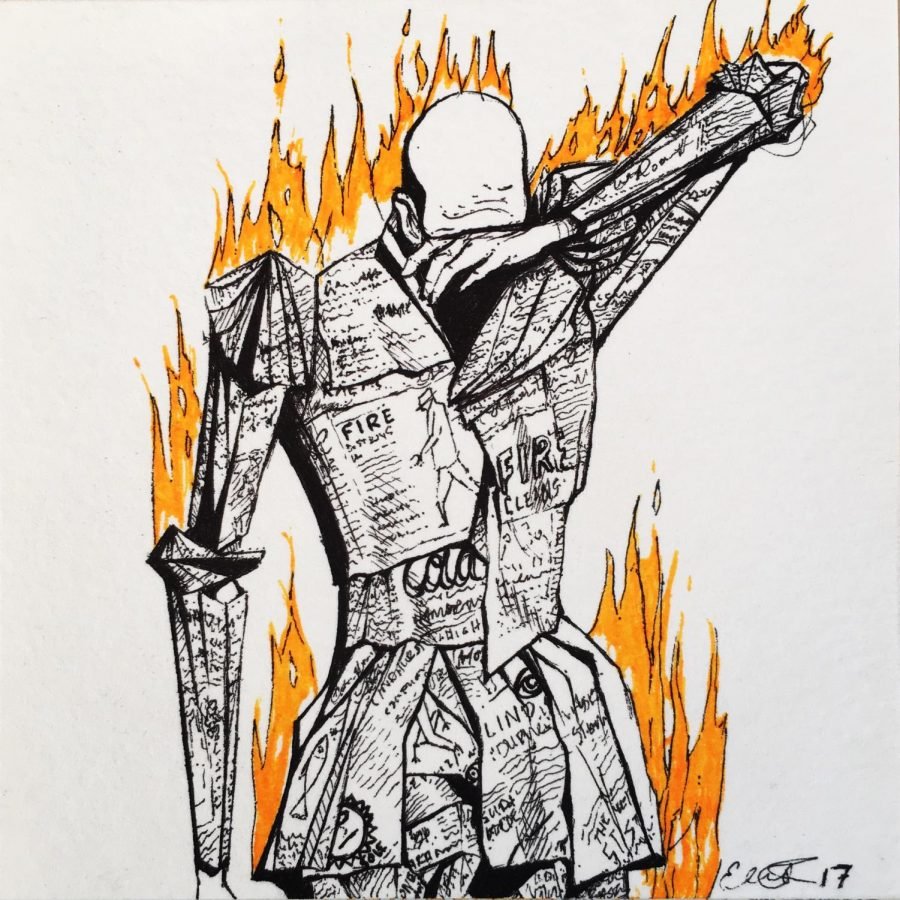 Not a pleasure to burn.

Thankfully or direly, hopefully or forebodingly, we are all sailing away into the sunset of a cash economy, and in many ways I have come to prefer cashless. But not always, and for what I deem good reasons.

Cashless depends on a whole set of circumstances to function. Namely, layers of technology, which, when compared to hand-to-hand hard cash, could be considered obstacles, at least up close in the near and present. Unlike cash, which is more direct, right there, fast and in-your-face and in your hands, as is the slightly slower plastic, material credit cards. But both are independently there, exist in the material present. For the active and present, there's a security and speed in that.

Case in point the time I attempted to travel experimentally overseas, sans cash or credit, and my smart phone, with all my wallets and info locked me out, leaving me not only cashless but valueless, feeling reduced to nothing. I suppose I could have hocked the phone, since it was a later model that was a rare and desirable commodity in the place I was. I managed to hack back into my phone and all my vital info, but since that time, since that scare, whenever I go somewhere else, I always take one of these with me, just in case: 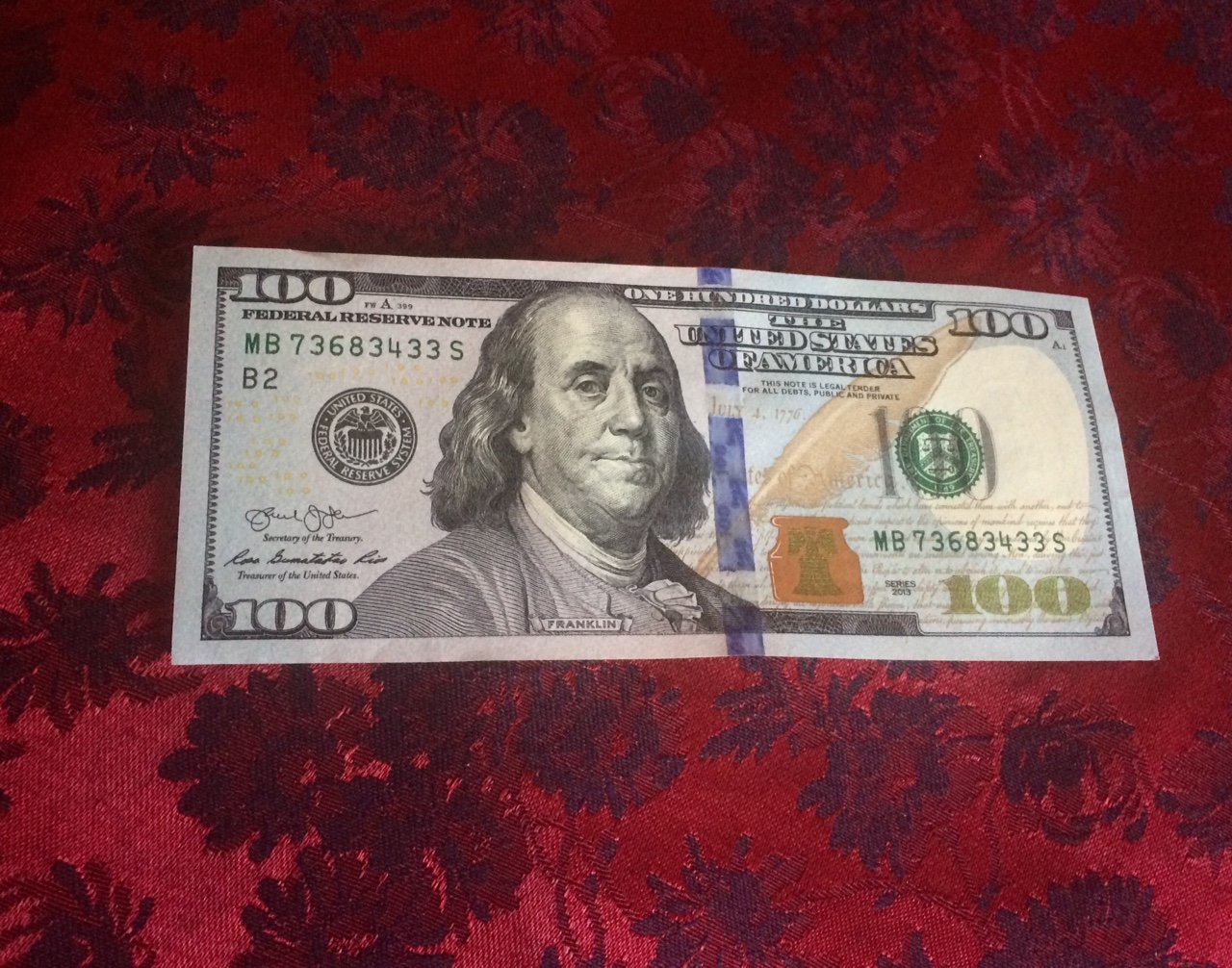 (No, I am not writing from a brothel or trap house. Doesn't Franklin have a nice smile? Wow, finally some color on a US greenback!)

Still, cash, sexy as it might have once seemed to be around, is dirty—dirty and likely drug and disease ridden, which makes it strange during these Covid times, we don't find ourselves quarantining or social distancing from cash when it's around or available. Despite the seeming lightness and efficiency of just carrying a smart phone with digital wallet around, my trust only goes so far. Cash is bulky and dirty, but it is also still quite universal, with no particular anything, skills, apps, gadgets, required to use it. It is there and it is real. If someone offered you a $100 bill or $100 in XRP, which would you opt for? Think about it. For me, it would depend on other factors beyond just the form of the value.

Which is really more efficient or secure? More hopeful? Holds more potential? Cooler? Cash or cashless? Coil members, read on for more practical considerations in no particular order on this great self-debate going on inside my head and likely yours: